Induge me in this chapter, I don’t know the level of knowledge you have regarding the Kabbalah. You may have a lot or you may have none, you might see the kabbalah as something that is worthwhile learning for yourself or you may see it as something that should be banned to all. However I will be explaining the following with a kabbalah and Old Testament slant because this is what I relate to and I think it is something you should relate to or at least be willing to learn a concept of.

I like the kabbalah because you can ‘draw out’ a map of existence or at least that which is comprehendible to us. You have clergy of other religions saying things like ‘God is up in the sky, heaven is up in the sky and hell is down below’, I don’t know what you believe or what you think but to me these types of explanations simply are not good enough! If these types of people in clergy don’t know as to metaphysical, cosmological and occult matters they should simply just say so and not give a diatribe about how ‘their church’ or whatever is perfect and if you want to go to heaven when you die then you must do exactly what they say. Quite frankly I find these sorts of people to be hustlers and think they should be expelled from their religions so they can turn to their real faith of stockmarket and real estate speculation.

Not only that, their now vacated positions should be filled by people who will be willing to learn about subjects such as metaphysics and the occult and be willing to explain it to anyone who wants to find out about these things. But if the varying faiths just want to peddle inane twaddle and guilt people into paying tithes and voting for certain political parties, then they should no longer be able to claim tax exempt status as a religious institution but should be taxed as a business. I’m not writing this just to fill a page but because if I’m right you will need every drop of metaphysical knowledge you can get your hands on and those who are neglectful in their duties should be exposed so as not to waste yours or anyone elses time. 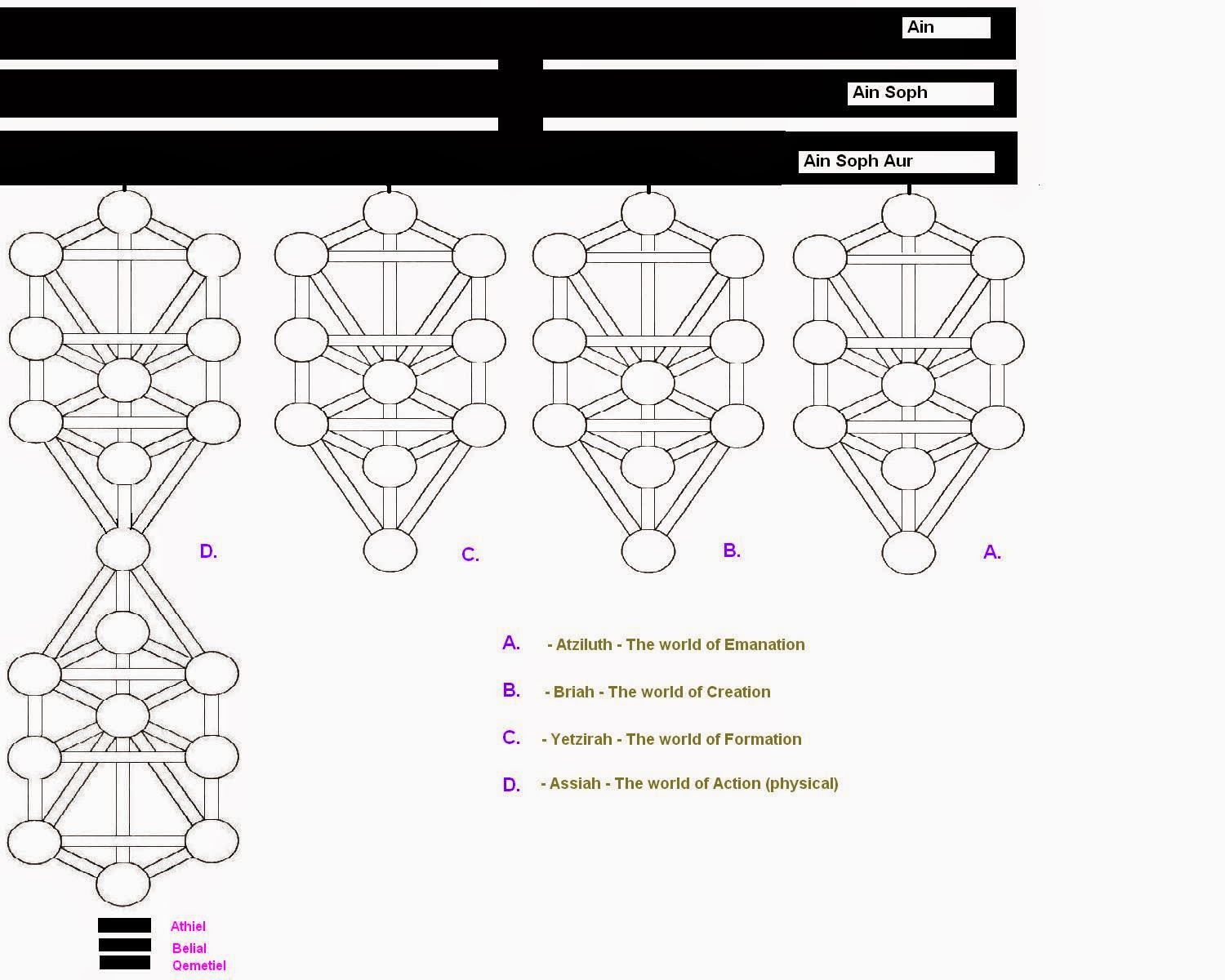 This is my ‘map’ of existence that humans can access to the best of my knowledge at this present time.

Going from right to left we have A. which is Atziluth, the world of Emanation. This realm is purely spiritual, we might relate to it as where we would realise a ‘need’ rather than a want. In B. we have Briah, the world of Creation. Here is what we think would resolve our need, how we envision it. Next we have C. Yetzirah, the world of formation. We have the need, the way we think it can be dealt with and now we have to put into place the ‘blueprints’ or plan to bring it about. Finally we have D. Assiah, the world of Action. The physical realm in which our solution takes physical form and is put into action. This is the stage for the result of our non physical thoughts on our plans.

As we see, the Tree of Life is present in the three worlds of Atziluth, Briah and Yetzirah. The fourth world being Assiah has both the Tree of Life and the Tree of Death which are joined at the tenth sephirah, for us it is Malkuth. But for the qlippoth (demons) it is Lilith. So we have the same sephira with two different names, if the qlippoth want to have their own independent tree then instead of having a 50% stake in this earth in this world they will have to take it all. And this is what they are chipping away at, look at the Israel/Palestine example; it wasn’t all that long ago when Israel had not only all the Palestinian territories under its’ control. It had the Sinai peninsular of Egypt and still retains the Golan Heights and the Shebaa Farms of Syria. But yet not only have the Egyptians gotten back the Sinai but the Palestinians have got a good deal back under their nominal control. In addition the Gaza strip is under the control of Hamas which still seeks to destroy Israel.

But we are not talking about a small patch of land in regards to Malkuth; we are talking the entire planet Earth in both physical and spiritual terms (Tebhel and Cheled). And as the qlippoth are not physical beings but may occasionally be able to take physical manifestation by possession of human bodies; we are seeing that their main offensive is being done by spiritual warfare. If you are an occupying power in a foreign land you will have a population to deal with who are different in physical (race) and non physical (culture, language, religion) terms. An occupying power might try and integrate these people into a now expanded nation, or else it will have two alternatives; those being indifferent neglect or complete subjugation.

Let’s have an overview of the situation of the qlippoth as of this current time; they are not physical beings but can take a physical form of a human if the human whose body they have taken has either given consent or else relinquished that body via suicide, drug addiction, medical malpractice etc. causing physical death. But with medical technology available now that actual physical body may be revived and may be subject to take over especially if the person involved was an atheist, Satanist, apostate etc.

Even then the position of that person in relation to society may be that of a homeless bum and be of no position of power within their society. However with an intelligent persona taking hold of that body the situation and circumstance of that ‘person’ may change. As to what the qlippoth in that body can do to advance their cause in whatever amount of time will depend on circumstance, but will also have to take in account the physical state of the body they now possess. Sometimes we do see the actions of some mentally truly brilliant and truly evil people and how they change nations, societies and indeed the world as history will point out.

But as to the qlippoth fighting humans on a purely physical level? It would be a slow grind for them; the physical front is just another front. By itself it would not be sustainable to fight humans on that level; it needs to be combined with spiritual warfare to complement it. And on the spiritual front they are making success by drawing in humans who seek spiritual knowledge but are dissuaded by self serving and narrow minded insecure religious leaders. But they are making success with a major drawcard which has turned human beings into self declared enemies of God; it is called atheism.
And atheism has done well; it has killed approximately 130,000,000 people. It had contained and extinguished religious belief in a lot of countries and a lot of people, many of whom lived and died without having a concept of God. Despite all of that, despite communism being shown to be a flawed and corrupt ideology. Despite Karl Marx being shown to be an ‘in the closet’ Satanist, yes despite all of that we have celebrities get on TV and tell us (if not actually order us) that leftist politics and ideologies are perfect and good for all of us. That we must be socially progressive and must eliminate anything that interferes with that aim and that includes God. And if you insist that there is God then you must redefine him to fit a socially progressive consensus.
Posted by leon fortayne at 01:37

Email ThisBlogThis!Share to TwitterShare to FacebookShare to Pinterest
Labels: Jehovah is Lord God Almighty, tree of assiah, tree of death, tree of life, tree of life and death of the knowledge of good and evil